Discussion at the Anticafé, December first, 2016 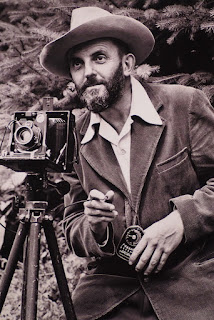 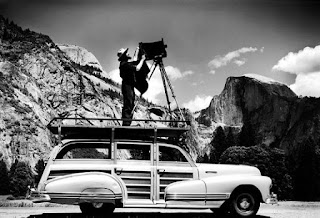 Adams grew up in a house located in the middle of the sand dunes of the Golden Gate region.

He spent a lot of time in the region of Yosemite and Sierra Nevada each year from 1916 until his death. From his first visit, Adams was amazed and transformed by the grandiose sceneries. He walked, climbed and explored the region with amazement. In 1919, he joined the Sierra Club and spent the first of four summers at Yosemite Valley as the “keeper” of the club’s LeConte Memorial Lodge. He became friends with several leaders of the club, all visionaries and founders of the of growing conservation movement in America. 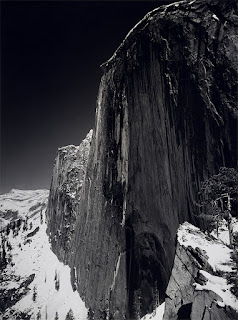 Monolith, The face of Half Done, Yosemite National Park, 1927

The Sierra Club played a vital role for the beginning of Adams’s career as a photographer. His first photographs were published in the Bulletin of the Club in 1922. He had his first exhibition in 1928, at the headquarters of the club in San Francisco. In 1934, Adams was elected to the Board of Directors of the club and was recognized as the artist of Sierra Nevada and the defender of Yosemite.

1927 was the turning point in Adams’ life

He made his first visual photograph, Monolith, the face of half-dome, during his first great travel. More importantly, he met Albert Bender, an insurance company magnate in San Francisco and a protector of the arts and artists. Literally the day after their meeting, Bender started the preparation of Adams’ first portfolio “Parmelian prints of the High Sierras”. Thanks to Bender’s friendship, his encouragement and his financial support, Adams was able to turn his life around. With his creative energy and capabilities as a photographer, he built confidence in his own ability to pursue his dreams. The newspaper critic Abigail Foerstner wrote in the Chicago Tribune (dec. 3, 1992),” he has done for the national parks something comparable to what Homere has done for Ulysses.” 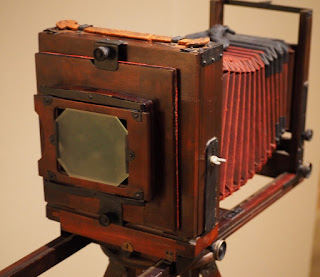 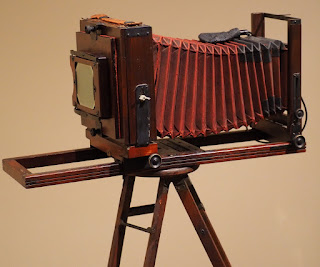 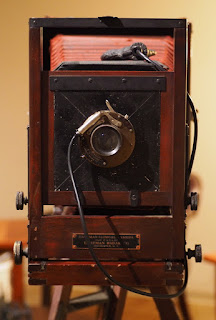 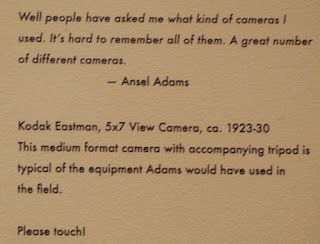 Photographic equipment used by Adams and exhibited at the San Antonio Briscoe Museum in November 2016, presenting the Ansel’s Bank of America collection.

In addition to the summers spent taking photographs of the Sierra Nevada, Adams made several long trips to the South-West in order to work with writer Mary Austin. Their beautiful limited edition book, Taos Pueblo, was published in 1930. 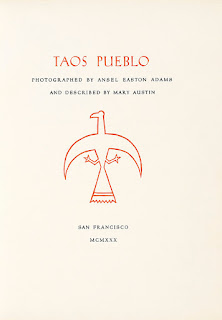 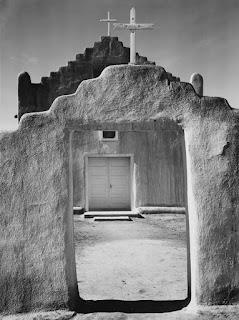 Example of photographs from the Taos Pueblo collection.

During the same year, Adams met with photographer Paul Strand, whose images had a powerful impact on Adams and helped him move away from the pictorialism style (creation of an image that is modified, manipulated, and idealized) that he had favored in the 1920s. Adams began to pursue the “photo-realistic“ style, in which the clarity of the subject is the central component of the photo and the final print gives no appearance of  any manipulation in the camera nor in the darkroom. 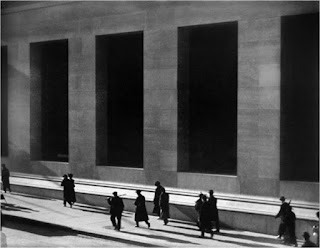 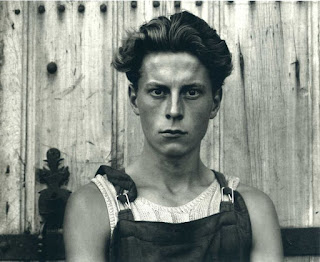 Manipulation, in this case means to modify the clarity or the content of the object being photographed. Techniques such as burning or dodging, as well as the system of zones, a scientific system developed by Adams, are used specifically to alter the tone and to give the artist the opportunity to modify the contrasts.

In 1927, Adams met with photographer Edward Weston (1886-1958). The gradually grew closer and closer to each other, both as friends and as colleagues. The famous Group F/64, founded in 1932, regrouped several photographers around the greatness of Weston and the dynamic energy of Adams. Although barely organized and of relatively short duration, Group F/64 offered a new vision of photography emerging from the West Coast. The DeYoung Museum of San Francisco organized an exhibition for the Group F/64. During the same year, Adams obtained his first solo exhibition in the museum. 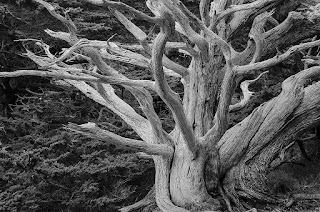 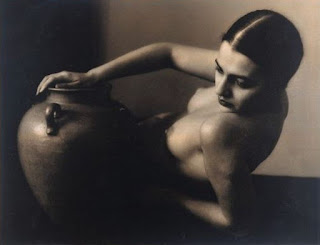 Adams’ reputation developed rapidly during the early 1930’s, powered by his talent, his energy and his numerous artistic activities.

He made his first visit to New York in 1933, to meet Alfred Stieglitz. The latter is the photographer and artist who inspired Adams the most; he admired his work and his artistic approach. They had an intense relationship and their relationship was frequent, rich and illuminating. In spite of being a true Westerner, Adams spent plenty of time in New York during the 1930’s and 1940’s. Stieglitz’s circle played an essential role in Adams’ artistic development. In 1933, Adams held his first exhibition at the Delphic Gallery in New York. He published a series of technical papers in Camera Craft in 1934. His first book was published in 1935. More importantly, in 1936, Stieglitz offered to Adams a solo exhibition at “An American Place”.

The recognition, however, did not alleviate Adams’ financial pressures. In a letter dated August 6th 1935, he wrote to Weston, ““I have been busy, but broke. Can’t seem to climb over the financial fence.” Adams was obliged to devote much of his time to work as a commercial photographer.

Adams’ technical mastery was a legend. Weston often consulted him for technical opinions. He served as a photographic consultant to Polaroid and Hasselblad.

Adams described himself as a photographer, a lecturer and a writer. He travelled the country without end in search of the natural beauty. Adams has a strong commitment to promote the photographic art and played a key role in the creation of the Museum of Modern Art in New York.

In the 1950’s and 1960’s, Nancy Newhall and Adams published several books and had several exhibitions of significant importance. Among them is the American Earth exhibition (1960), which, along with the classic of Rachel Carson American Earth played a crucial role in the launch of an influential citizen movement for the protection of the environment 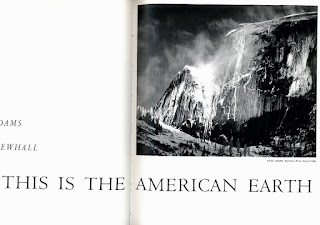 Adams is a tireless activist for the environmental cause and the wilderness. Over the years, he attended countless meetings and wrote thousands of letters to communicate the philosophy of conservation to newspapers editors, to the members of the Sierra Club, to government bureaucrats, and to politicians. However, his greatest influence came from his photographic production. His images became the symbol of wild America. His black and white images are not a realistic representation of nature. They were rather an intensification and a purification of the visual experience of the natural beauty. He created a feeling of natural splendor that leads the observer to see a greater beauty in the image than that in real life observation.

For Adams, environmental issues of importance have been related to the Yosemite National Park, the system of national parks, and above all, the preservation of natural spaces. He has fought for new national parks, for the Alaskan wild and his beloved Big Surf on the California coast, for the majestic Sequoias, for endangered species such as the sea lions and sea otters, and for the quality of the air and the water.

On 12 April 1977, he wrote to his Editor, Tim Hill, ” I know I shall be castigated by a large group of people today, but I was trained to assume that art related to the elusive quality of beauty and that the purpose of art was concerned with the elevation of the spirit”.

Adams was often criticized for failing to include humans or the evidence of “humanity” in his photographs of landscapes. The great French photographer Henri Cartier-Bresson made the following note: ” the world is falling to pieces and all Adams and Weston photograph is rocks and trees”.

The reputation of Adams as a visual artist is without match in the United States. The grandiose beauty of the American West Coast nature and Adams’s photographic skills have created a collection of spectacular images. Thanks to his charismatic personality, his conviction towards the protection of nature, he was able channel his energies to serve his fellow citizens and to preserve the American wilderness. More than any other American influence of his time, Adams believed in the hope of Humanity living in a balanced and harmonious environment.

Adams’ archives, which include documents, memories, correspondence, negatives, and many photographic prints are stored in the John P. Schaefer Center for Creative Photography at the University of Arizona, Tucson. 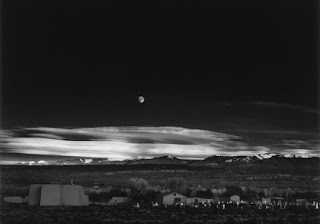 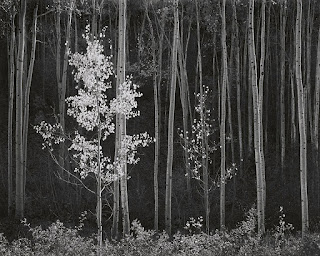